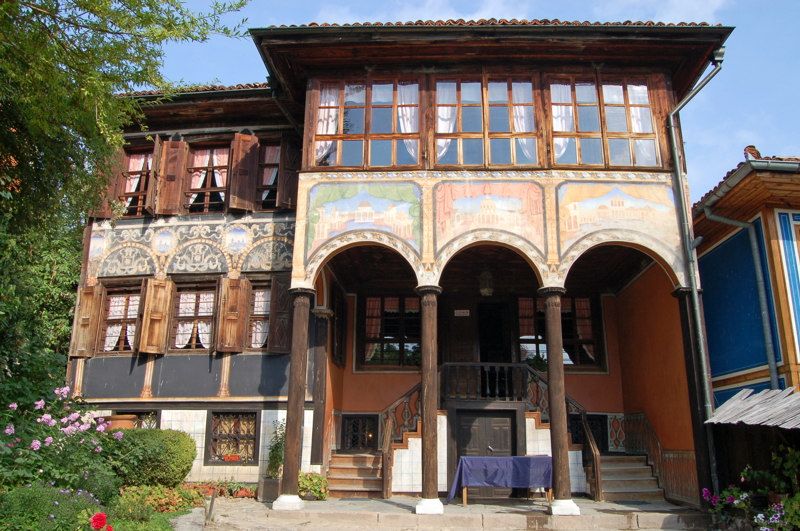 The house was built in the period between 1853 – 1856 by order of the wealthy cattle-drover Nencho Oslekov from Koprivshtitsa who later redirected his activities in the field of traditional Koprivshtitsa craft – homespun.
The house was built by master Usta Mincho from Samokov and the mural paintings are the work of Costa Zograf. Specific for it is the broken symmetry. Due to the narrow field the house remains with a central part and one wing. The facade lies on a structure resting on consoles of three Lebanese cedars. The house has two floors and a sunken cellar.    A double staircase with a beautiful wooden railing leads to the second floor. Impressive are the murals in blue and the red guest rooms, numerous niches, medallions and landscapes. Impressive are also the three large mural landscapes on the gable outside, depicting views of Alexandria, Cairo and Istanbul.

Nencho Oslekov participated in the preparations for April Uprising – in his homespun shop were made the clothes for the participants in the uprising. Because of this activity after the suppression of the uprising, Nencho Osekov was captured and hanged in Plovdiv

In 1956 it was turned into an ethnographic museum where the tourists can experience the traditional lifestyle, local crafts and national clothes. Exhibited are festival and casual women’s clothes from the nineteenth century, as well as traditional male clothes and a costume of the wealthy man from Koprivshtitsa. In Oslekova house visitors can see great examples of the famous sewed lace from Koprivshtitsa, women’s jewels from the mid-nineteenth century, hookahs and long pipes brought from Asia.